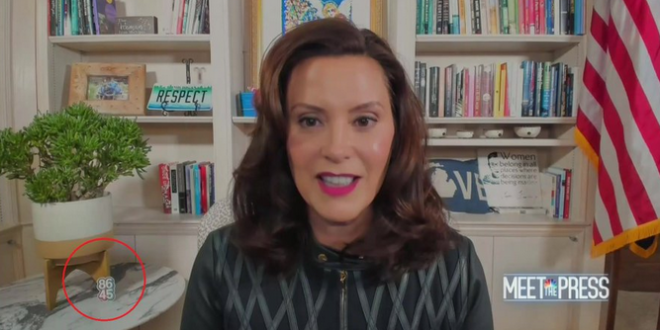 During the governor’s remote appearance on Meet the Press, an anti-Trump “86 45” pin could be clearly seen on her desk in the background. “45” refers to Trump, and “86” is slang primarily used by restaurant workers to denote getting rid of something or it being out of stock — though the shorthand, which has no confirmed etymology, has become popular outside the service industry as well.

The Google-armed linguists at the Trump campaign, however, later claimed that “86” has a far more nefarious meaning. The campaign alleged in a Sunday afternoon tweet that “86 can be shorthand for killing someone,” so it therefore stands to reason that “Whitmer is encouraging assassination attempts against President Trump.” Desperate false equivalency posed as campaign savvy hardly justifies the risk of what could happen if more well-armed extremists take the allegation seriously.

Governor Gretchen Whitmer displayed an “86 45” sign during her TV appearance.

86 can be shorthand for killing someone.

Whitmer is encouraging assassination attempts against President Trump just weeks after someone sent a ricin-laced package to the White House. pic.twitter.com/GzvtrjH40A

Gretchen Whitmer can’t have it both ways. These are the standards she set.

BIG 45 fan, and even I know this doesn’t mean, in any shorthand I’ve ever heard, to “kill” somebody. If you order a burger “86 the lettuce”, it doesn’t mean kill the lettuce, it just means you don’t want it. Cmon, let’s not be like the left, guys!

Lol such weak sauce. Tens of millions of people who have worked in restaurants know what “86” means. It’s shorthand for “cancel.”

When I was a waiter and people didn’t want mushrooms in their pasta, I’d write “86 mushrooms”.

WE CANNOT HAVE ANY MUSHROOM KILLERS OUT THERE. THE INJUSTICE OF IT ALL.

Bounced bars for 25 years. “86” means to kick someone out. We never killed anyone.
You are desperate jerks.

It succeeds only in proving everything about Trumpworld is stupid and everyone in it is an idiot.

86 means remove from the premises. Signed, a former bartender.

“Respect” is the title of a 1960s R&B song by the late Aretha Franklin.

Whitmer is secretly taking orders from Franklin about how she should govern Michigan. pic.twitter.com/BoN3PFyhcP

Previous CHATTER AWAY: Overnight Open Thread
Next Charlie Kirk Locked Out Of Twitter For Disinformation