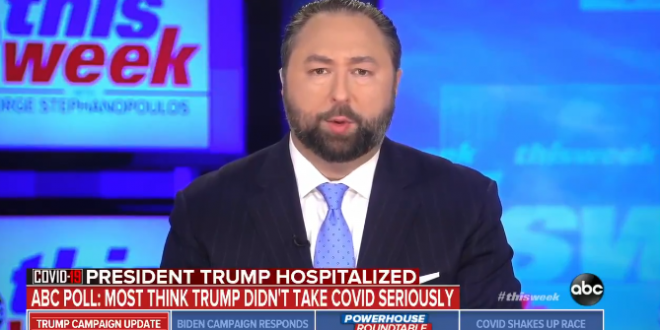 ABC News’s George Stephanopoulos on Sunday pressed President Trump’s senior campaign adviser, Jason Miller, on the president’s limited mask wearing following Trump’s positive coronavirus test late last week. Miller stood by the president during his appearance on “This Week,” pushing back after Stephanopoulos pointed out that Trump “didn’t have to continue to go to event after event without wearing a mask.”

“I’d push back on that because President Trump is one of the most tested people in the entire country, and there’s a lot we still don’t know about this virus,” he said. “So even with all of these things in place, we’ve seen where President Trump did contract COVID but he’s one of the most safe people that’s out there,” he added, noting that Trump has worn a mask in places where he “can’t socially distance” and has encouraged people to wear masks.

NEW: Trump campaign senior adviser Jason Miller defends the president’s handling of the COVID-19 pandemic after ABC News/Ipsos poll shows nearly 3 out of every 4 Americans doubt that Trump took the threat that COVID-19 posed to his well-being seriously. https://t.co/BHOgshyGxN pic.twitter.com/pE0fG7TCbM

Help make sure @JasonMillerinDC sees this. He can’t block all of us.

1/ A former friend who has joined the Washington “just following orders” crowd is horrified that we’re hitting Jason Miller.

I asked him which of Jason’s admitted actions — the prostitutes, the strippers, skipping child support, etc — he’d like to defend in public.

Me: “He has at least two families, one to whom he’s refusing to pay child support.”

“Too often, he’s used masks as a prop” — Jason Miller shamelessly attacks Joe Biden for wearing a mask even as his boss is in the hospital with Covid pic.twitter.com/NdQbnzZupN

TODAY: @chucktodd: “Can you explain why the president did not quarantine? … Clearly that was against CDC guidelines”@JasonMillerinDC: “Keep in mind that anybody around the president is tested”

“So what you’re saying is the White House does not follow CDC guidelines?” pic.twitter.com/5GfkiWucfn

Jason Miller uses a straw man argument that “we can’t all stay in our basements” forever. No one argues for sheltering in place. We plead for social distancing & masks. A mask isn’t a “prop”, it’s commonsense. After the WH superspreader event, only a fool would argue otherwise. https://t.co/JspG201Is6

Jason Miller will be the first witness for the prosecution in a massive criminal case post Trump Presidency on the depraved indifference that has led to 210k American deaths. https://t.co/jbNqVfBeqd

As if his boss isn’t in a hospital right now, Trump Campaign adviser Jason Miller goes on TV to say of Joe Biden, “too often he’s used the mask as a prop.” pic.twitter.com/dGjICtbSQj

How is it Jason Miller goes out on TV every single day and not one journalist has thought to ask him about the civil law suits against him for not paying child support and the reports that he demanded two different women get an abortion? Nobody asked about Manafort in 2016.