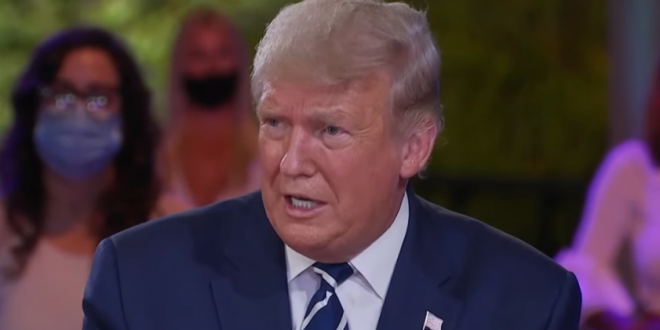 While discussing the issue of his taxes, President Donald Trump did not deny that he owes entities about $400 million, and pledged to tell Americans to whom he owes money. “I will not mind at all saying who it is,” Trump said Thursday, during a live town hall on NBC. He said he doesn’t owe money to Russians, and said of whether he owes to any foreign interests, “Not that I know of.”

“$400 million compared to the assets that I have, all of these great properties all over the world,” he said. He further minimized the amount. “What I’m saying is that it’s a tiny percentage of my net worth.” “The amount of money – $400 million, is a peanut,” Trump said, arguing that his company is under leveraged. Trump has made more than $200 million from his myriad business interests in foreign countries since 2016.

Here’s Trump at the NBC town hall trying to make it seem like owing more than $400 million is a totally normal thing pic.twitter.com/zWxCPbQBPa

TRUMP: *talks about how awesome his properties are*

G: “Are you confirming that you do owe some $400 million dollars?”

T: “What I’m saying is it’s a tiny percentage of my net worth.”

Trump seems to confirm he owes more than $400 million in debt. He says “it’s a tiny percentage of my net worth.” Then says it’s for mortgages. Says it’s not to Russia. Then asked if he owes foreign banks, and he says: “not that I know of“ before saying “probably.”

If trump thinks the $400 million he owes to mysterious entities is a peanut, why is he fighting a $70m audit so much, and saying that blocks his ability to release his tax returns? Its a peanut of a peanut

Previous Trump Defends Claim Bin Laden Is Still Alive: That Was A Retweet, People Can Decide For Themselves [VIDEO]
Next Study Finds COVID Spikes Worse In Red Counties