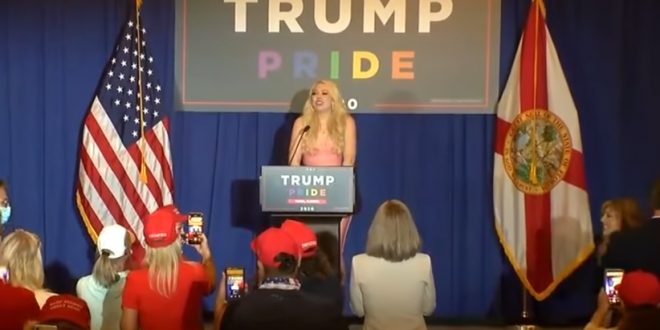 The youngest daughter of Donald Trump, Tiffany Trump took part in a Trump Pride event in Florida this week to help her father’s re-election efforts.

The event took place at the Westshore Grand Hotel in Florida and a clip of Tiffany on stage has started to circulate on social media, with many criticizing her for speaking for the LGBTQ+ community when her father’s presidency has consistently rolled back laws protecting them.

“I know what my father believes in. Prior to politics, he [Trump] supported gays, lesbians, the LGBQIIA+ community,” Tiffany began before then talking about “fabricated lies” and social media. She said: “It saddens me. I have friends of mine who reach out and they say how could you support your father, we know your best friends are gay.”

Tiffany Trump is what happens when Miley Cyrus dresses up as Ivanka for Halloween. https://t.co/i2aFzzwHss

Seeing Tiffany Trump try to label her father,someone who banned trans people from serving in the army,tried to change the legal definition of gender&worked to make it possible for LGBTQ people to be discriminated against, as an LGBTQ ally makes my skin crawl as an LGBTQ person.🤢

.@TiffanyATrump Sweetie, trans people are here to stay, we’re leading this movement, and you’re not welcome in it. https://t.co/NYX09mvq4A

Since Tiffany Trump’s appearance at the Trump Pride campaign event is trending, heres a rundown of how the Trump administration rolled back LGBTQ rights https://t.co/gO2cvcfbCR