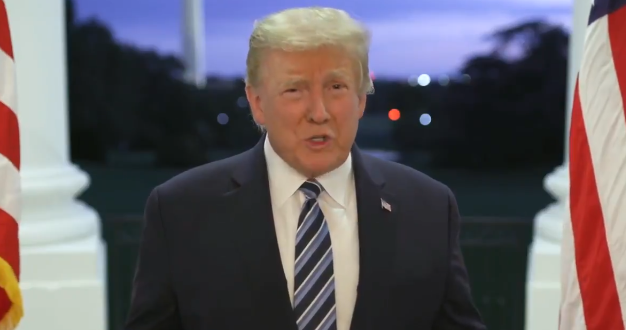 President Donald Trump on Monday baselessly suggested he might be “immune” to COVID-19 after a weekend in which he was hospitalized and administered supplemental oxygen, an experimental antibody cocktail, and a steroid generally used for severe cases of the virus.

“I knew there’s danger to it. But I had to do it. I stood out front. I led. Nobody that’s a leader would not do what I did. I know there’s a risk…But that’s OK. And now I’m better. Maybe I’m immune, I don’t know,” Trump said in a video posted to Twitter upon his return from Walter Reed Medical Center, where he was transferred on Friday as his condition worsened.

This is the type of propaganda video I’m used to seeing from authoritarians and populists in the former Soviet Union. I’ll say it again, more and more the US is resembling countries I’ve covered as a foreign correspondent. https://t.co/vieoSoBYu0

Staring into a solar eclipse was practice for this moment.

That video will absolutely get people killed.

Screenshot this for the relapse. https://t.co/Meh2nDiKer

Trump looks like he is gasping for air pic.twitter.com/4k2v4Jxlir

This scene of the president ripping off his mask, posing and saluting, is deranged.

Drudge is not impressed with the Glorious Return. pic.twitter.com/YxCP9Upxem

Masks matter. They save lives.