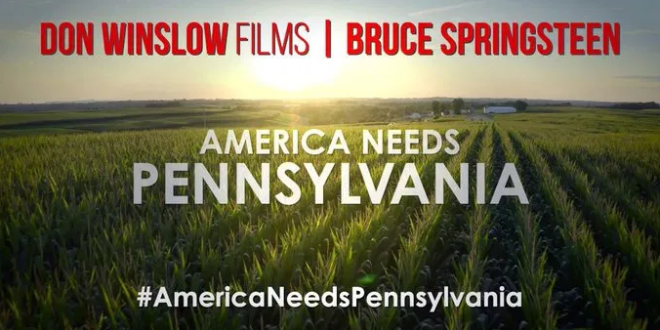 Don Winslow has released, via his Twitter account, his new anti-Trump video, “America Needs Pennsylvania,” which is set to the music of Bruce Springsteen’s “Streets of Philadelphia,” with The Boss’ permission. The video’s release is planned to coincide with a trip today by Trump to Pennsylvania, which is considered a swing state. It uses grim images and videos from the months of the pandemic as well as footage of the Rev. Martin Luther King Jr. and Barack Obama making speeches in Pennsylvania, and scenes of protest.

#AmericaNeedsPennsylvania and #Springsteen are both trending high on Twitter at this writing. In an unrelated move, Twitter today launched a Springsteen emoji which, unfortunately, does not appear in embedded tweets.

We need more than **1 MILLION VIEWS** before he lands.