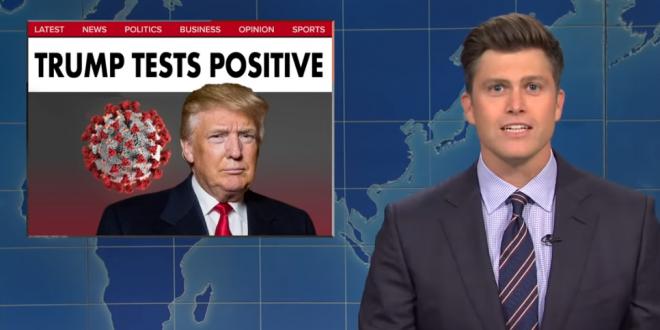 SNL Host Colin Jost: If This Had Happened To Biden, Trump Would Be At A Maskless Rally Mocking Him

SNL Weekend Update host Colin Jost joked about Trump’s tweets from the hospital. “I will say, that despite everything Trump actually seems to be in good spirits. He tweeted a message that said, ‘LOVE!!!,’ and three exclamation points so it sounds they’re cutting his hydroxychloroquine with a little bit of molly,” he said.

“Just hours ago, Trump released a video from the hospital saying he’s in better health, which is great news. Though I will point out that if the situation were reversed, and it was Biden who got sick, Trump would 100 percent be at a maskless rally tonight getting huge laughs, doing impressions of Biden on a ventilator.

Appearing on stage in a mask shortly after the episode’s cold open, Rock then removed it and addressed the biggest news of the week.

“Before we even get started, let’s… you know, the elephant in the room. President Trump is in the hospital from COVID and you know, I just want to say my heart goes out to COVID,” Rock joked, prompting laughter and applause from the audience.

The cold open was focused on Tuesday’s presidential debate — though it quickly became apparent that it was impossible to successfully parody something that was already such a train wreck. Jim Carrey made his debut as Joe Biden, while Alec Baldwin resumed his Emmy-winning role as Trump.

Beck Bennett played ineffective moderator Chris Wallace, who kicked things off by saying “I think I’m going to do a really, really good job tonight” and ended with “Just to ensure this is the worst presidential debate in history, I’d like to close with White supremacy.”

Of course, things went off the rails, with Trump interrupting constantly and Maya Rudolph making an appearance as Kamala D. Harris as she tried to referee the proceedings.