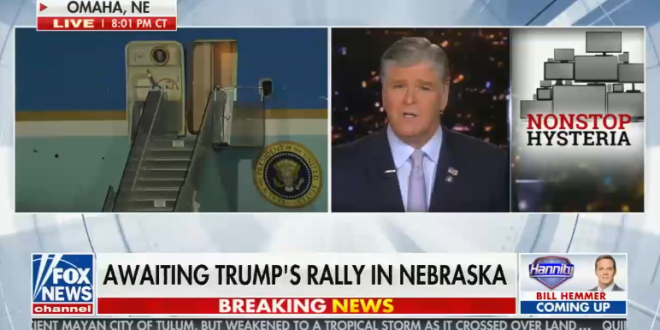 “Democrats, their allies, the media mob are doing everything they can possibly do to demoralize voters, especially the supporters of the president.

“And despite major progress in our fight against COVID-19, including advancements that are huge in therapeutics, multiple final human stage trials for a vaccine, courtesy of President Trump’s Operation Warp Speed, a rebounding economy — we’re expecting massive third-quarter GDP numbers this week on Thursday.

“Despite all of the good news, there is now a constant coronavirus hysteria 24/7 on every other news network. They want you to believe there’s no hope under President Trump.

“In fact, according to the Media Research Center, 92 percent of all network news coverage of the president has been negative. That’s 92 percent.

“And right on cue, Joe Biden predicting the dark winter unless you elect him. Apparently nobody’s told him about the therapeutics and the vaccines that we’re very close to getting.” – Sean Hannity, last night.

Previous Lou Dobbs: Democrats Are The Enemies Of The People
Next Giuliani Rages At Fox Business Host: You’re Comparing Me To A Crook, You Better Apologize To Me [VIDEO]