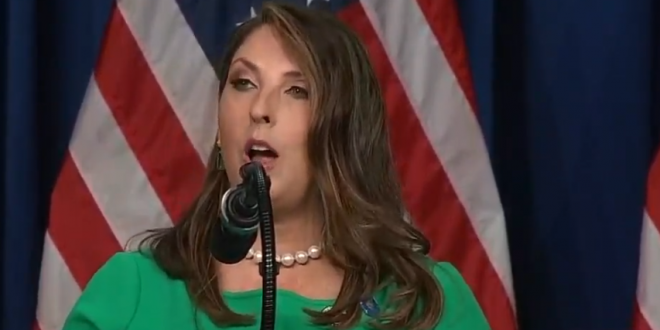 First of all, the president and his FBI foiled this plot,” she responded. “I think Governor Whitmer is really inappropriate to try to lay blame at the president. These were sick individuals, there was no political affiliation.” As McDaniel said she was thankful for Whitmer’s safety, Stephanopoulos reminded her “he’s saying lock them all up!”

“Because of her locking down our state,” McDaniel responded. “Let’s not take the rhetoric further. Let’s not continue to extrapolate things that were not being said.”

“The president and his FBI foiled this plot” — Ronna McDaniel defends Trump repeatedly ginning up “lock her up!” chants toward Gretchen Whitmer by attacking Whitmer and making it seem as though Trump personally broke up the kidnapping/assassination that recently targeted her pic.twitter.com/5OfqgHx8Mv

Ronna McDaniel refuses to condemn QAnon, saying “it’s something the voters are not even thinking about” pic.twitter.com/H6R0C5XBg3

Previous CBS Poll: Joe Biden +5 In Wisconsin, +3 In Arizona
Next Trump Campaign Flack: Voters Hate It When People “Make A Lot Of Money Trading On Their Family Name”