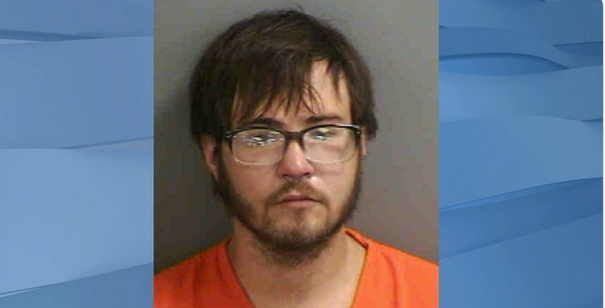 A Florida man was arrested and charged with assault and battery after shoving hotel staff and calling them vulgar names. Justin Mills, 24, of Auburndale, is facing one count of battery and two counts of assault after walking into a Courtyard Marriot in Naples around 6 a.m. Wednesday without a mask, according to the arrest report.

The night auditor told police Mills, a guest of the hotel, walked into the lobby, pushed him, called him “a f*****g bitch,” threatened to spit on him, and called him “an Indian bitch.”

Mills then followed the clerk behind the front desk and knocked the glasses off of his face, according to the Naples Police Department. The unnamed clerk threatened to call police on Mills who responded saying “If you call police…one day I’ll wait for you, beat the shit out of you and put my d**k in your mouth.”

The hotel manager, arriving at work, was told by the clerk that he had called the police on a guest who had hit and threatened him. The manager went to Mills’ room to order him off hotel property, which she says led Mills to scream obscenities at her and say he should kill her, at one point raising his fist as if to punch her.

The clerk shoved Mills away from the manager, who said as he exited through the lobby that he and the clerk were even now. Mills went to his vehicle and police arrived.

The hotel manager wishes to press charges of her own against Mills and trespassed him indefinitely from the hotel property. Mills was arrested and taken to the Collier County Jail.

Previous C-SPAN Suspends Presidential Debate Moderator For Lying About His Twitter Account Having Been Hacked
Next Trump: Only Jesus Christ Is More Famous Than I Am