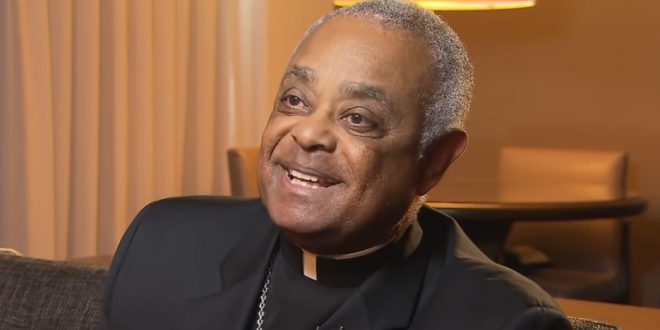 Pope Francis announced on Sunday that he would name Washington’s archbishop, Wilton Gregory, a cardinal next month, making him the first African American to earn such a title.

Gregory will be one of the 13 cardinals in the new class, a promotion that comes at a time when he is also trying to rebuild trust in an archdiocese rocked by sexual abuse cases.

The move was widely anticipated, as Washington archbishops are typically named as cardinals after their appointments. But it is nonetheless symbolically significant in the U.S. Catholic Church, where Blacks have been underrepresented among the leadership.

Gregory was highly critical of Trump’s bible stunt outside the Episcopal church across from the White House. He last appeared on JMG in 2014 when he apologized for building himself a $2.2 million Atlanta mansion.

“I failed to consider the impact on the families throughout the Archdiocese who, though struggling to pay their mortgages, utilities, tuition and other bills, faithfully respond year after year to my pleas to assist with funding our ministries and services,” Gregory said. The Catholic leader said he will discuss the situation with several diocesan councils, including a special meeting of its finance council. If church representatives want the bishop to sell the home, Gregory said he will do so and move elsewhere.