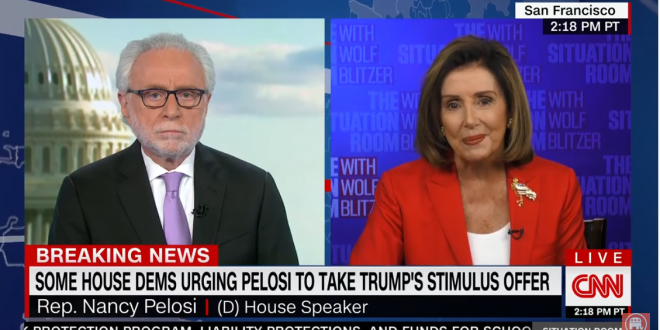 House Speaker Nancy Pelosi on Tuesday ardently defended her decision to hold out on coronavirus negotiations and not accept the White House’s $1.8 trillion offer. In a heated exchange with CNN’s Wolf Blitzer, Pelosi pushed back on some dissent from members within her own party, saying they don’t understand how the negotiations are going.

The CNN host cited arguments from Rep. Ro Khanna, California Democrat, and Andrew Yang, a former candidate for the Democratic presidential primary, that called for the speaker to agree to $1.8 trillion and put pressure on Senate Republicans.

“I don’t know why you’re always an apologist — and many of your colleagues —an apologist for the Republican position. Ro Khanna — that’s nice. That isn’t what we’re going to do and nobody’s waiting until February,” Pelosi said. Trump expressed his intention Tuesday for a large deal, signaling to Republicans to “go big or go home.”

“I don’t know why you’re always an apologist, and many of your colleagues, apologists for the Republican position.” pic.twitter.com/yVwUo17a96

Nancy Pelosi is having none of what Wolf Blitzer is serving. “With all due respect, Wolf. We’ve known each other a long time, but you do not have any idea what you’re talking about. You’re just serving up anecdotes.”

Nancy Pelosi loses it after CNN’s Wolf Blitzer grills her on why she can’t just call up Trump and hash out a stimulus package.

“With all due respect… you really don’t know what you’re talking about!” pic.twitter.com/dqZzniAwsO

Wolf Blitzer grilling Pelosi on why she won’t take $1.8T deal. Reads Ro Khanna tweet..
Pelosi: “I don’t know why you’re always an apologist and many of your colleagues are apologists for the Republican position– Ro Khanna, that’s nice. That isn’t what we’re going to do.”

PELOSI: We’ll leave it on the note that you are not right on this Wolf. … Thank you for your sensitivity to our constituents’ needs.

BLITZER: I am sensitive to them because I see them on the street begging for food, begging for money.

PELOSI: Have you fed them? We feed them. pic.twitter.com/2gJpBLjYLK

Nancy Pelosi just tore into Wolf Blitzer for taking the administration’s side on stimulus bills “when you haven’t even bothered to find out what they both say.”

Previous Brian Brown Thrilled His Hate Group Got Mentioned At SCOTUS Hearing: “Send Me Your Most Generous Gift”
Next Barr’s “Unmasking” Probe Collapses In Pile Of Nothing