“Although we’re in the midst of a big political fight, and we take that very seriously, we also want to extend our best wishes to the president of the United States, the first Lady,” Obama said kicking off a grassroots virtual fundraiser with VP nominee Sen. Kamala Harris and Black Panther star Michael B. Jordan.

Following the news of the Trumps’ condition late last night, the Biden campaign have started to pull all their negative ads nationwide as quickly as possible. Like on the 9/11 anniversary last month, clearly not the approach the Trump team are taking. 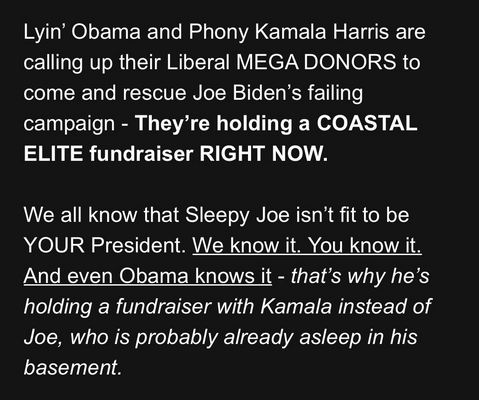 The Trump campaign just sent out a fundraising email with the subject line “Lyin’ Obama.” The email goes on to mock Joe Biden for being “asleep in his basement.” The Biden campaign, meanwhile, has pulled all negative ads.

Previous GOP Wins Lockdown Court Battle With Michigan Gov
Next Fox News Host: Trump Got COVID For All of Us [VIDEO]