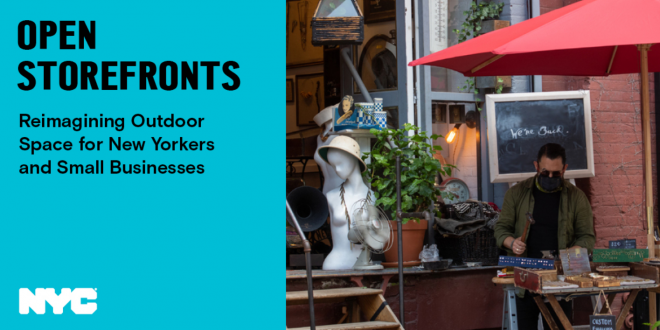 NYC Shops Can Now Sell Products Out On Sidewalks

New York City small business owners will be able to sell their wares outdoors as part of the city’s new Open Storefronts Program, Mayor Bill de Blasio announced today. The initiative is modeled after the city’s Open Restaurant’s program and will allow shop owners to set up space to sell merchandise on sidewalks directly in front of their business.

Store owners will be allowed to set up outdoor retail space five feet out directly from their buildings as well as five feet high and at all times allow an eight-foot clear path for pedestrians, officials said. Mayor de Blasio said that the city chose to roll out the new initiative now to allow businesses to capitalize off the Christmas season.

New York’s “Open Storefronts” program gives businesses a usable frontage and allows them to spill over to the sidewalk.

How they approach the design of this new interaction will determine their success.https://t.co/R577mxGn1D pic.twitter.com/YcFX8lCzB6

We are thrilled to announce Open Storefronts! This reimagining of outdoor space will allow ground floor storefront businesses to use a portion of the sidewalk to conduct business. Learn more and check your eligibility: https://t.co/U9kn4FRcXc 1/3 pic.twitter.com/tmA6MWgtJZ

You’ve heard of Open Restaurants, now get ready for Open Storefronts. NYC’s small businesses are the city’s lifeblood. Starting Oct. 30, come visit your favorite stores out on the sidewalk, and support your neighbors and revitalize business in our city.https://t.co/VLe4uuqVnf