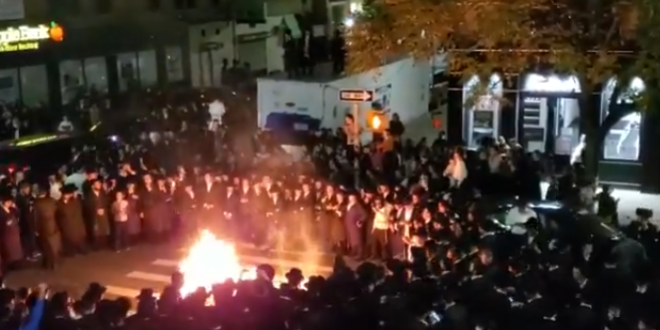 Members of the ultra-Orthodox community in New York City gathered on the streets late Tuesday to protest the new restrictions imposed on neighborhoods with alarming numbers of new COVID-19 cases. Some protesters attempted to block the camera when NBC New York’s crew arrived at the scene in the Borough Park section of Brooklyn, but video shows at least over a hundred people demonstrating against Gov. Andrew Cuomo’s latest rules.

Borough Park is among nine neighborhoods in New York City’s “red zone” where the current coronavirus positivity rate is above 3% for seven consecutive days. Many of the hotspots have a large Orthodox population, who say they feel they are being scapegoated for the rise in new cases. An Orthodox Jewish organization called the restrictions “appalling to all people of religion and good faith” and threatened to explore all options to undo it.

HAPPENING NOW: Orthodox Jews take to the streets of Boro Park, Brooklyn, in New York, to peacefully protest new lockdown restrictions by @NYGovCuomo on places of worship, saying they single out Jews. pic.twitter.com/Y3kGnWQcyC