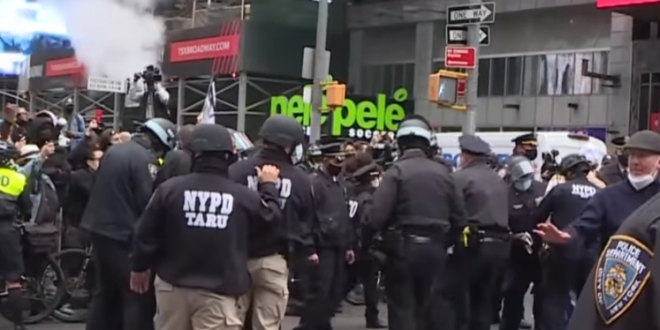 Skirmishes broke out between supporters and opponents of President Donald Trump as a Jews For Trump convoy of hundreds of cars draped with American flags and Trump 2020 banners rolled slowly through Manhattan and Brooklyn on Sunday afternoon.

The caravan traveled from Coney Island to the Trump Tower in Manhattan before heading to a rally in a Brooklyn park. Videos shared on Twitter showed several protesters pelting the vehicles with eggs or stones, snatching flags and shouting insults.

Trump’s personal lawyer Rudy Giuliani briefly greeted supporters from the passenger seat of a car driving near Trump Tower during the parade, videos show. Boris Epshteyn, an adviser to the Trump campaign and co-chair of Jewish Voices for Trump, organized Sunday’s rally in Brooklyn’s Marine Park at the end of the car parade.

According to the police, the pro-Trump caravan passed through Times Square, where it converged with a group of anti-Trump protesters who had marched from Brooklyn. The cars in the convoy were then blocked by counterprotesters, and some drivers got out of their cars to confront the anti-Trump demonstrators.

The two sides hurled political slurs — calling each other “fascists” and “anarchists”— traded blows, and fought over the Trump supporters’ flags before the police broke them apart, according to videos posted online.

Seven people were arrested in New York City on Sunday after a group that identifies itself as “Jews for Trump” clashed with counter-protesters—and one video showed Rudy Giuliani being screamed athttps://t.co/mzOWNF2EKl