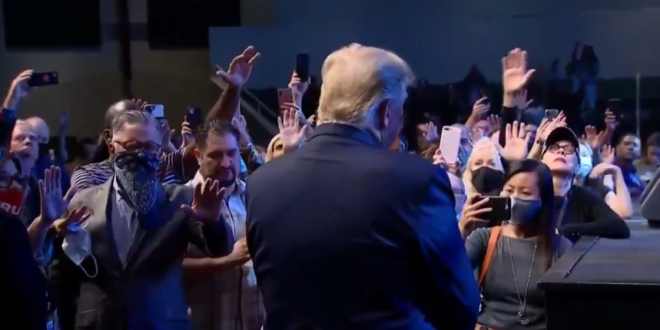 At least 200 people prayed and cheered for President Donald Trump during a Sunday morning service at a church in western Las Vegas.

The president attended the 9 a.m. service at the International Church of Las Vegas, near Summerlin. Later in the day, Trump headed to Southern California for a fundraiser and then to Carson City for Make America Great Again rally at the Carson City Airport.

During Sunday morning’s service, Pastor Marc Paul Goulet praised Trump and told him, “You’re doing a great job.” Many cheered as they prayed and blessed the president.

“The Lord said to me I’m going to give our President a second win.”

Everything in this terrific photo is jaw-dropping.
There’s #Trump, looking beatific at services in the International Church of Las Vegas. His Secret Service agents wear masks, but few in the congregation do. Some congregants hold their hands in the worship position, aimed @POTUS. pic.twitter.com/7SgNY48xJM

At the International Church of Las Vegas, where Trump is attending this morning, a worship band is singing while flag-wavers twirl American flags emblazoned with the Statue of Liberty. (Technically, a violation of the U.S. flag code)

No one onstage I can see is wearing masks. pic.twitter.com/1hWOCgXzQi

Lmao, trump is so desperate he actually went to church today with people he despises and mocks.

Sadly, he did not burst into flames upon entry.

At the urging of Church clergy, parishioners raise their hands toward Pres Trump to offer blessings. “I don’t care what anyone says, I love my President,” said clergy. Another said God told her He was giving the President a “second wind.” pic.twitter.com/WSqULjYcUQ

I’m riveted by this picture, taken today at a Las Vegas church where the minister “pledged to fast one day a week for Trump and his family through the election and then through November” and his wife “prophesied that Trump would win in November.” Because he looks so satanic. pic.twitter.com/vowUapssmC

The International Church of Las Vegas, where Trump is attending services this morning, was among the houses of worship receiving federal PPP loans earlier this year — in the amount of $350K-$1m — per ProPublica’s database. https://t.co/NY89D8ytU7

Previous Steve Bannon: If Trump Loses, He’ll Run Again In 2024
Next Trump Warns That Biden “Will Listen To The Scientists”