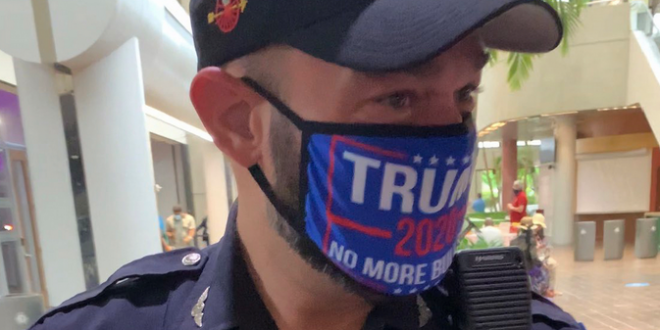 A uniformed Miami police officer was photographed Tuesday morning at a Florida polling location wearing a “Trump 2020: No More Bullshit” face mask, a move the department said is an “unacceptable” violation of MPD policy.

The photo of Officer Daniel Ubeda wearing the pro-Trump mask at the Government Center in Downtown Miami immediately went viral, causing swift backlash from the community, with many saying that his conduct constituted voter intimidation.

The person who spotted the mask and took the photo just happens to be the chairman of the Miami-Dade Democratic Party.

Here is @CityofMiami Police Officer Daniel Ubeda, in full uniform with badge and gun wearing his Trump mask inside of the polling location in government center.

This is city funded voter intimidation.

Ubeda should be suspended immediately. pic.twitter.com/TbJxu6mcem

We are aware of the photograph being circulated of a Miami Police officer wearing a political mask in uniform. This behavior is unacceptable, a violation of departmental policy, and is being addressed immediately. pic.twitter.com/E3eO0IQh0f