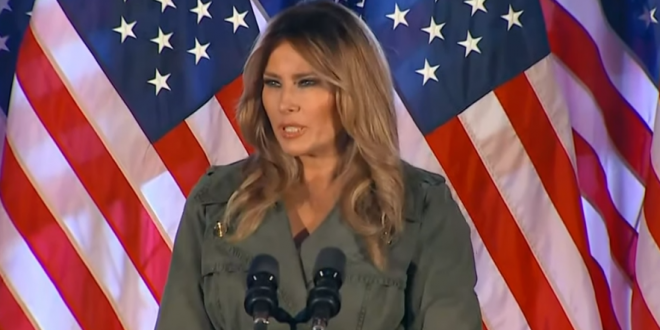 In her first solo campaign event of 2020, first lady Melania Trump delivered her most political speech to date in the battleground state of Pennsylvania, blasting Democrats for attempting to divide the country, she said, and defending the administration for choosing to move forward — “not backward”– in its pandemic response.

She went on to slam Democrats for what she called a “sham impeachment” while she said Trump took “decisive actions” to slow the spread of the pandemic. “This sham was led by opposition and their display of hatred is on display to this day,” she said to roaring applause.

Urging Pennsylvanians to get out the vote, she painted Democrats as a looming threat to “traditional values,” while pitching her husband as the anti-politician candidate who will keep American families safe.

Melania Trump in Pennsylvania: “Thank you for the all the love you gave us when our family was diagnosed with COVID-19. We are feeling so much better now thanks to healthy living and some of the amazing therapeutic options available in our country.” https://t.co/dlmHTmd8jP pic.twitter.com/w5N2oXBrLd

Campaigning in Pennsylvania, first lady Melania Trump called her husband a “fighter,” defending his use of social media: “I don’t always agree the way he says things, but it is important to him that he speaks directly to the people he serves.” https://t.co/RFZDC5tAhs pic.twitter.com/snG7ilplRj