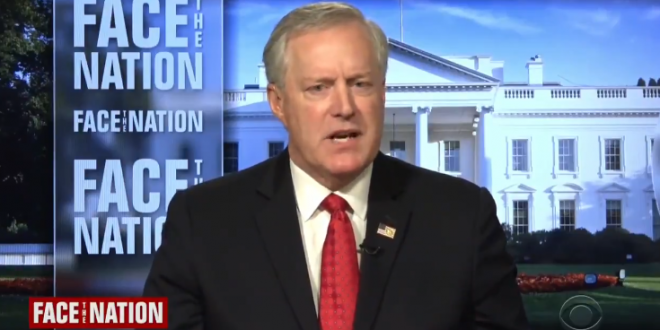 Meadows: Next 48 Hours “Will Be Critical” For Trump

President Donald Trump went through a “very concerning” period Friday and the next 48 hours “will be critical” in his care as he battles the coronavirus at a hospital, White House chief of staff Mark Meadows said Saturday. Meadows’ comments contradicted the rosy assessment of Trump’s condition offered by his staff and doctors, who took pains not to reveal the president had received supplemental oxygen at the White House before his hospital admission.

“We’re still not on a clear path yet to a full recovery,” said a weary Meadows. It was a dramatically different picture than the one painted by the White House staff since Trump revealed his diagnosis as well as by his doctors, who updated the public at a press conference at Walter Reed National Military Medical Center. White House officials, including Meadows, had insisted Friday that Trump had only “mild symptoms” as they tried to project an image of normalcy.

Per AP: “Trump’s chief of staff, Mark Meadows, said the president went through a ‘very concerning’ period Friday and the next 48 hours will be critical in terms of his care.” https://t.co/Pw0WvmPltp

Rethinking a bit:
What if Meadows isn’t a fool but is acting responsibly?
What if Trump told docs to put good face on things?
What if Meadows knows it’s bad, that Sec. 3 of 25A for temporary transfer of power could be needed? Could he be trying to box Trump in to having to agree?

UPDATE: Immediately after the press conference ended and before the anonymous statement was sent out, Mark Meadows briefed reporters without cameras—but he was caught on a feed asking to be off the record. pic.twitter.com/JyrhSmu1Y0

**BREAKING: CHIEF OF STAFF MARK MEADOWS OUTED AS “ANONYMOUS SOURCE” WHO SAYS TRUMP IS IN WORSE SHAPE THAN DOCTOR IMPLIED.**

Apparently he had supplemental oxygen on Friday in order to be able to walk to the helicopter.

I feel we are headed for some more dire updates in the hours ahead.

Doctors, Nurses and ALL at the GREAT Walter Reed Medical Center, and others from likewise incredible institutions who have joined them, are AMAZING!!!Tremendous progress has been made over the last 6 months in fighting this PLAGUE. With their help, I am feeling well!