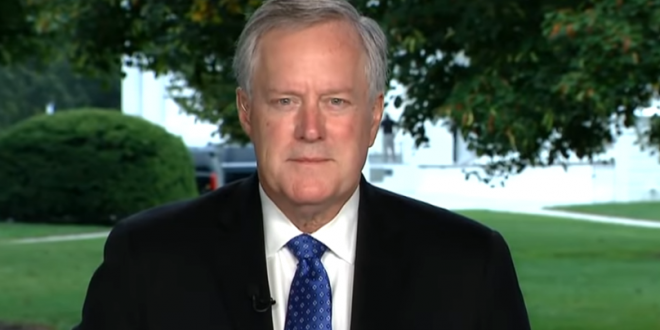 White House Chief of Staff Mark Meadows confirmed plans for an outdoor ceremony at the White House on Monday night to swear in Barrett, brushing off questions about whether that would be responsible given the outbreak of coronavirus cases after the Sept. 26 Rose Garden event announcing her nomination.

Meadows also sought to clarify comments in a television interview Sunday in which he suggested that the administration had effectively given up on trying to slow the virus’s spread.

“Well, the only person waving a white flag along with his white mask is Joe Biden,” Meadows told reporters. Appearing Sunday on CNN, Meadows said: “We’re not going to control the pandemic. We are going to control the fact that we get vaccines, therapeutics and other mitigations.”

WH Chief of Staff Mark Meadows both doubles down and tries to walk back his comment that “we’re not going to control the pandemic” from Sunday.

Meadows begins, “The only person waving a white flag, along with his white mask, is Joe Biden.” pic.twitter.com/Cbd0c5SprN