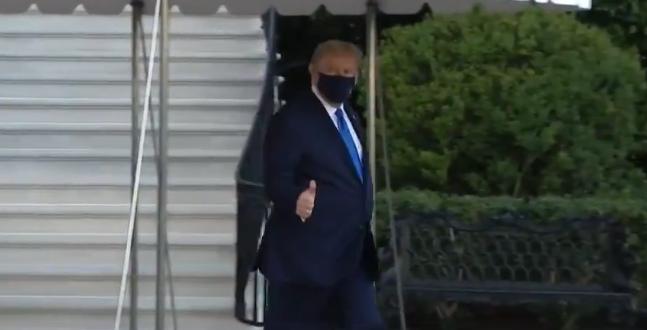 President Donald Trump has appeared in public for the first time since his COVID-19 diagnosis, giving a thumbs-up before he boarded Marine One for a military hospital. Trump walked out of the White House to the helicopter Friday evening on his way to Walter Reed National Military Medical Center.

The White House says Trump will spend a “few days” at a military hospital on the advice of his physicians after contracting COVID-19. The White House says that the visit is precautionary and that Trump will work from the hospital’s presidential suite, which is equipped to allow him to continue his official duties.

BREAKING: President Trump walks from the White House to Marine 1 as he departs for Walter Reed Medical Center. https://t.co/fsOmqt6C31 pic.twitter.com/dsCQpY8vHh

President Trump gives a thumbs up as he departs the White House for Walter Reed Medical Center in Maryland. pic.twitter.com/ZHqRkxZBa1