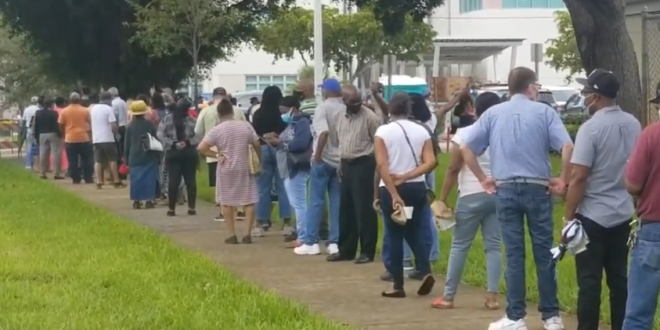 Long Lines As Floridians Turn Out For Early Voting

Voters streamed to polling places in Broward, Miami-Dade and Palm Beach counties for the first day of Florida early voting. Many lined up before daybreak, anxious to get their ballots cast — undeterred by the weather, which ranged from heavy downpours to light sprinkles throughout the region.

Jose Sanchez, 54, of Fort Lauderdale, was at the front of the line at the early voting station in Wilton Manors. He arrived just before 5 a.m. and stood for two hours. “I want to make sure I get my vote in.” The wait, he said, was “absolutely well worth it.”

At the regional branch library west of Boca Raton, one voter reported via text at about 8 a.m., it was raining “and there’s still a long line.” Others posted video of lines on social media, including long lines at the Southwest Regional Library in Pembroke Pines.

Good morning, I voted early by mail but today begins early voting day at the polls and the video from my friend @ntntgo out in Boca, Florida shows that not even rain will stop these patriots from voting. pic.twitter.com/oZYfrLjq5g

Day one of early voting in Florida! Polls opened just over an hour ago, and there’s about 100 people in the snaking line ahead of me, in a hard rain. pic.twitter.com/bjqwC3iKMz

Keep going. Keep getting out our vote. 15 days. Organize and donate every day!!!

“I want Biden and Harris to get in with all my heart and soul,” says Judy Angove, 77, who arrived at early voting center at 6:30 a.m., half hour before start of Day One of Florida early voting. Said she was concerned about long lines if she waited. pic.twitter.com/hbRLmuaZGU

A line has already formed at the North Miami Public Library on the first day of early voting in Florida. Some were there before 5 am https://t.co/oS18C7vTV1