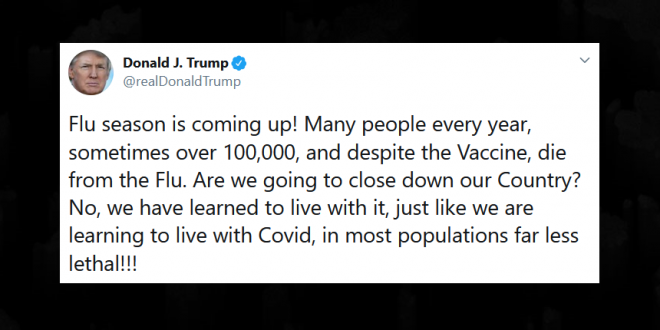 Trump Lies: COVID Is “Far Less Lethal” Than The Flu

Stand by for Twitter to zap this latest lie:

Fresh from telling Americans not to be afraid of the coronavirus in the wake of his release from hospital, Donald Trump has now made the untrue claim that Covid-19 is “in most populations far less lethal” than the flu.

The president’s tweet contradicts his own remarks to Bob Woodward earlier this year, when he told the investigative journalist that Covid-19 was “deadly stuff” and up to five times more lethal than the flu.

“It’s not just old, older [people that the virus poses a threat to],” Trump said to Woodward. “Young people too, plenty of young people.”

Flu season is coming up! Many people every year, sometimes over 100,000, and despite the Vaccine, die from the Flu. Are we going to close down our Country? No, we have learned to live with it, just like we are learning to live with Covid, in most populations far less lethal!!!

You just said it. There is a VACCINE for the flu!

The flu is also much less deadly.

Wake up!
Stop pretending Covid doesn’t exist!
Biden won’t shut anything down unless science mandates it.

Reminder: Trump, just out of the hospital where he received experimental treatment, told Bob Woodward in February that COVID is “more deadly than even your strenuous flu.” https://t.co/aNZl4BoiaJ

I read the first sentence of this tweet, and my stupid brain thought “Maybe he’s going to encourage people to get flu shots to dull the impact of the winter COVID resurgence.”

You sweet, stupid brain. You know better than that. https://t.co/83CwW7bIpD

On Feb 7 before even one American died from Covid, Trump told Bob Woodward that the virus was “deadly stuff” and “five” times more dangerous than the flu. Now with 210,000 Americans dead Trump says about Covid “Don’t be afraid.” #TrumpLied200KDied https://t.co/s6VOH7gNJc