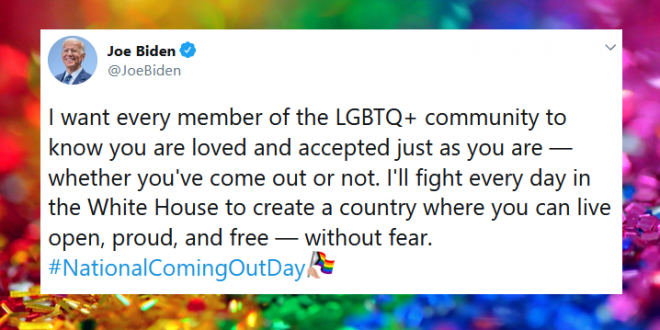 From the Biden campaign:

Joe Biden believes that every human being should be treated with respect and dignity and be able to live without fear no matter who they are or who they love. During the Obama-Biden Administration, the United States made historic strides toward LGBTQ+ equality—from the repeal of “Don’t Ask, Don’t Tell” to Biden’s historic declaration in support of marriage equality in 2012 to the unprecedented advancement of protections for LGBTQ+ Americans at the federal level.

But this fight’s not over. Donald Trump and Mike Pence have given hate against LGBTQ+ individuals safe harbor and rolled back critical protections for the LGBTQ+ community.  Hate and discrimination against LGBTQ+ people started long before Trump and Pence took office. Defeating them will not solve the problem, but it is an essential first step in order to resume our march toward equality.

I want every member of the LGBTQ+ community to know you are loved and accepted just as you are — whether you’ve come out or not. I’ll fight every day in the White House to create a country where you can live open, proud, and free — without fear. #NationalComingOutDay

Previous Eric Trump: My Father Took The Vaccine He Created
Next Tomorrow: Evangelicals To Hold “Sacred Assembly” At SCOTUS To Stage “Intercessory Prayers” For Nominee