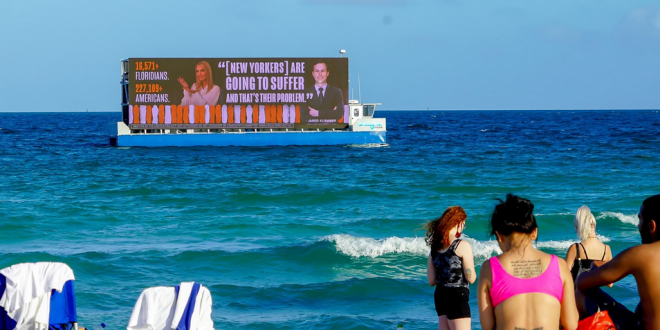 Jarvanka Billboards Are Being Towed Along FL Beaches

The Lincoln Project, a prominent anti-Trump Republican group, has moved its billboards featuring Ivanka Trump and husband Jared Kushner to Trump’s Mar-a-lago property in Palm Beach, Fla., by boat ahead of Election Day.

The digital billboards are the latest development in the back-and-forth between the two White House advisers and the anti-Trump PAC. Lawyers for the couple threatened to sue over the billboards, which were first put up in Times Square in Manhattan.

They threatened to sue @ProjectLincoln for “enormous” sums.

In honor of their demands, here is the boat we hired, on its way to Mar-A-Lago.