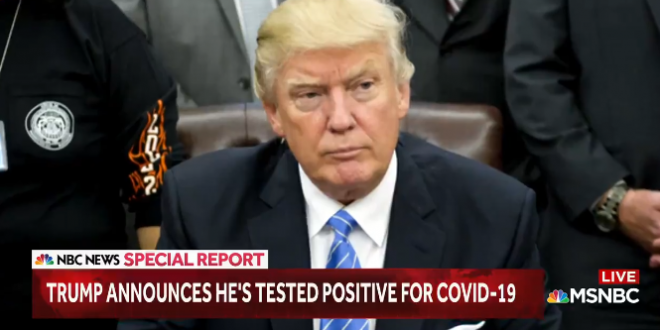 President Trump said early Friday morning that he and the first lady have tested positive for the coronavirus, throwing the nation’s leadership into uncertainty and escalating the crisis posed by a pandemic that has already killed more than 207,000 Americans and devastated the economy.

The president’s physician said Mr. Trump was “well” without saying whether he was experiencing symptoms and added that the president would stay isolated in the White House for now.

Other aides to the president would not say whether he was experiencing symptoms, but people at the White House noticed that his voice sounded raspy on Thursday, although it was not clear that it was abnormal for him, especially given the number of campaign rallies he has been holding lately.

Tonight, @FLOTUS and I tested positive for COVID-19. We will begin our quarantine and recovery process immediately. We will get through this TOGETHER!

“The President and First Lady are both well at this time, and they plan to remain at home within the White House during their convalescence,” the president’s physician says. pic.twitter.com/hKn51lJaHV

As too many Americans have done this year, @potus & I are quarantining at home after testing positive for COVID-19. We are feeling good & I have postponed all upcoming engagements. Please be sure you are staying safe & we will all get through this together.

NOTE: Below is the post that I started to work on last night. I had expected it to be our first item in the morning.

Hope Hicks, one of President Donald Trump’s closest aides, has tested positive for the coronavirus. Hicks, who serves as counselor to the president and traveled with him to a rally Wednesday, tested positive Thursday, according to an administration official, who spoke on condition of anonymity to discuss private health information. She is the closest aide to Trump to test positive so far.

The White House did not immediately respond to multiple questions about the last time Trump was tested and whether he and other staffers who spent time with Hicks in recent days will be asked to quarantine. Hicks traveled with the president multiple times this week, including aboard Marine One, the presidential helicopter, to a rally in Minnesota Wednesday, and aboard Air Force One to Tuesday night’s first presidential debate.

Trump’s tweet came minutes after the White House disclosed his schedule for Friday, which includes White House meetings, a roundtable with supporters and an evening campaign rally in Florida. The White House didn’t comment on whether the president’s quarantine would result in events being canceled.

After NBC News and other outlets reported on Hicks’ positive test, Trump himself confirmed it Thursday night in an interview with Fox News’ Sean Hannity. He also said that he and first lady Melania Trump had just been tested and were awaiting results to come either Thursday night or Friday.

Hope Hicks, who has been working so hard without even taking a small break, has just tested positive for Covid 19. Terrible! The First Lady and I are waiting for our test results. In the meantime, we will begin our quarantine process!

No mask for Hope Hicks getting on Marine One yesterday pic.twitter.com/sqdALCMZf2

Here’s Trump mocking Biden for wearing a mask at the debate on Tuesday. He traveled to that debate with Hope Hicks, who has tested positive for coronavirus. pic.twitter.com/MvFs3HR2Z3

Trump adviser Hope Hicks has tested positive for the coronavirus and is experiencing symptoms, a source says. Hicks traveled with Trump to Cleveland for the presidential debate along with other senior aides https://t.co/KOC5cxf8UW pic.twitter.com/2jTzO4tlV2

Hope Hicks has been mask-less in proximity to Trump’s inner circle this wk—on AF1 to the debate with FLOTUS and his other relatives. She was in staff van with WH aide Stephen Miller, campaign adviser Jason Miller etc in Cleveland. Lots of possible exposurehttps://t.co/q7rPL58Qbc

Hope Hicks has COVID and has been in close contact w POTUS. The next debate is Oct 15. Should Joe Biden be sharing a stage with Trump who follows no masking or quarantine protocols? What would a doctor recommend?

If Trump gets Covid from Hope Hicks, do you think we should call it fake news?

NYT: Officials at the White House have known since Wednesday evening that Hope Hicks had the virus. https://t.co/oj1pmAqB0Q

Hicks traveled with the president to Pennsylvania for a rally on Saturday, to Cleveland for the debate and to Minnesota for another campaign rally.

She was photographed without a mask at the Pennsylvania rally clapping to the Village People’s YMCA. https://t.co/PzAS3SsVZz