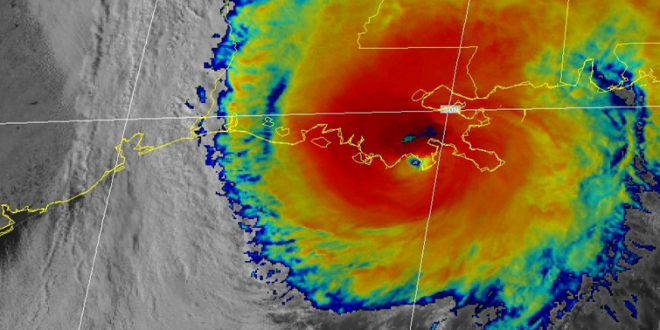 The National Hurricane Center says Hurricane Zeta has crashed ashore in storm-weary Louisiana as a powerful Category 2 storm, striking the latest blow of an extraordinarily busy Atlantic tropical storm season. The Miami-based center says a hurricane hunter aircraft confirmed at 4 p.m. Wednesday that the menacing storm had made landfall near Cocodrie, Louisiana.

The fast-moving storm came ashore on the southern Louisiana coastline in a region of the Gulf Coast that has already been in the crosshairs of earlier storms this season. The storms this season have so far veered away from New Orleans, but this time the low-lying city appeared squarely in the hurricane’s path. In a 5 p.m. update, the National Hurricane Center said Zeta has top sustained winds of 110 mph. It was just 1 mph shy of becoming a powerful Category 3 storm.

Zeta has been racing and intensifying as it has been approaching Louisiana today. It made landfall at a CAT 2 hurricane with max winds of 110 mph. CAT 3 strength starts at 111 mph. @WSAV @WSAVKrisA @KyleDennisWx @WSAVScottR pic.twitter.com/8L202pbmcf