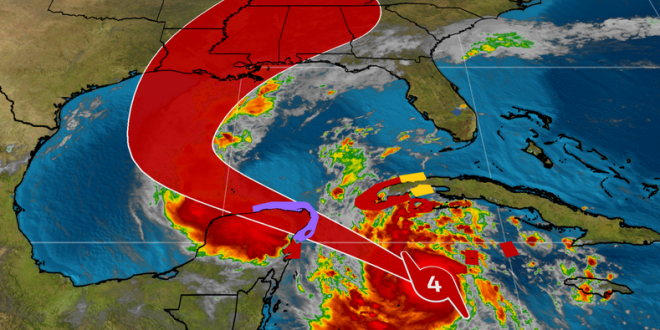 AccuWeather meteorologists have put the Gulf Coast of the United States on high alert for what could be a disastrous strike later this week by a very dangerous hurricane.

Overnight and through early Tuesday morning, Hurricane Delta escalated quickly into a Category 4 storm and forecasters warn it could strengthen even more before it strikes the Yucatan Peninsula.

After that, forecasters expect Delta to emerge over the extremely warm waters of the Gulf of Mexico, where it could maintain its strength for a time.

The hurricane’s winds had increased to 130 mph by 11:20 a.m. EDT Tuesday just over 24 hours after it became the 25th tropical storm of the 2020 Atlantic hurricane season.

This could be the strongest hurricane strike on Cancún in 15 years, since Wilma stalled over the northeast Yucatan Peninsula after becoming the strongest Atlantic Basin tropical cyclone on record, by pressure.

After that, forecast guidance suggests that Delta will eventually turn northward toward the U.S. Gulf Coast late in the week.

Where and when that northward turn occurs will determine what areas see the greatest potential impacts, somewhere from as far west as the upper Texas coast to Louisiana into the Florida Panhandle.

BREAKING: #Delta is now a Category 4 #hurricane, based on wind measurements just in from a NOAA Hurricane Hunter mission. pic.twitter.com/sNRpkCwqcu

Hurricane Delta has strengthened to a building-wrecking Category 4 hurricane as it barrels toward Cancun https://t.co/c5lMWFmu50