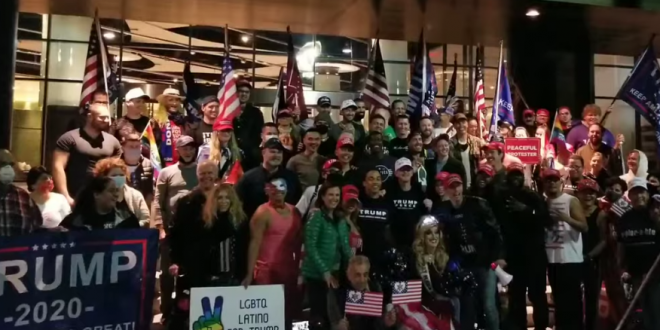 The event was spearheaded by the Log Cabin Republicans who had asked people to show up in support for the “Gays and Housewives Take Over WeHo March,” in Facebook and Instagram posts. It took place as millions of Californians have already submitted their mail-in ballots. The march was fairly short, only spanning about one block. It started at the Pacific Design Center at around 10 PM, went up to Rocco’s (a gay bar and restaurant), and then turned around and headed back to the Pacific Design Center.

Max Edwards, a supporter of the president and advocate for the march, told the Blade, “We’re here to support Trump and mostly the LGBTQ community to let them know they have more options than just voting.” When asked about his opinion about people who claim that Trump is anti-LGBTQ+, Edwards said, “I think they’ve got to do their homework. There’s a lot of proof, a lot of stuff out there, that proves that’s not correct.”

No masks on any of them.

Last night, a group of freedom-loving LGBT people and allies marched in the heart of WEST HOLLYWOOD in support of President Trump.

The hate was there (of course) – but there was SO MUCH LOVE!

The silent majority is no longer silent!pic.twitter.com/3uDIReInwV

A group of 50 LGBT Trump supporters are marching through West Hollywood. They have marched from the Pacific Design Center to Rocco’s, right in the heart of Boy’s Town. 4 sheriff’s patrol cars are following. pic.twitter.com/tTEzLwjq48