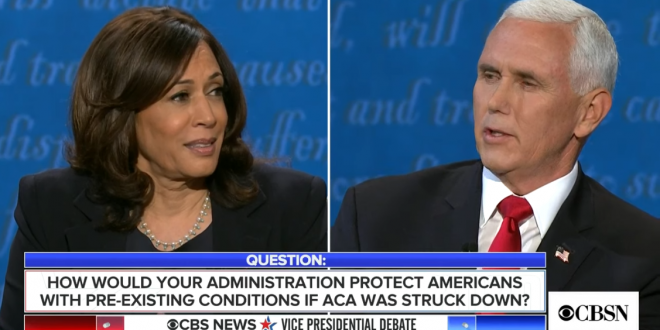 Harris Keeps Pence On The Defensive In VP Debate

Harris was aggressive — seizing on the Democratic ticket’s central argument, that the Trump administration’s handling of the novel coronavirus was “the greatest failure of any presidential administration in the history of our country.” She accused the president of covering up information about the virus when he was briefed in January by his national security team, and argued Trump still didn’t have a plan to combat the disease.

Pence defended the president’s record and pointed to Trump’s decision to restrict travel from China at the end of January as evidence he took the threat seriously. He also attempted to portray Harris’ criticism of the administration’s response as an attack on the sacrifices Americans have made during the crisis, an answer that seemed to fall flat. Throughout the debate, whether the question was about the economy or health care, Harris returned to the administration’s response to the pandemic.

More Americans said Sen. Kamala Harris did the best job in the vice presidential debate tonight, according to a CNN Instant Poll of registered voters who watched. About six in 10 (59%) said Harris won, 38% said Vice President Mike Pence had the better night.

Those results roughly match voters’ expectations heading in to the debate. In interviews conducted before tonight’s debate, 61% of these same voters said they expected Harris to win, 36% thought Pence would.