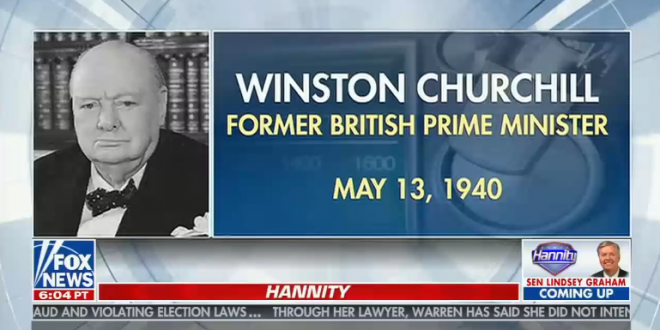 “Tonight one key question does stand out. Do you want a leader who’s willing to fight every minute of every day for the country, for the people of the country? Or do you want a — well, to be honest, a shadow of a man who hides in his basement bunker disappearing and putting a lid on things most days by 10:00 A.M.

“What defines us? What does it mean to be an American, rugged individualist? Do we run from important challenges? Do we cower in fear? Do we appease our enemies? Do we — or do we get up every day and fight to make our country a more perfect union?

“And on the other side of the Atlantic — 1940 — the great Winston Churchill echoed this fearless call to action. A powerful address. Victory at all costs. Victory in spite of all terror. Victory however long and hard the road may be, for without victory, there is no survival. Remember this?

“And during the bombing of Britain, where was he everyday? Going out, risking his life, being among the people of Great Britain. In times of great hardship you must fight for survival. And that is exactly what the President has done during this country’s battle against COVID-19.” – Sean Hannity, last night.