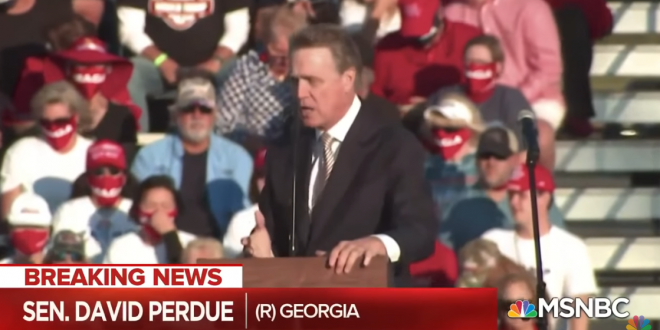 Warming up the crowd in Macon, Georgia, Perdue flubbed his colleague’s name before going on to mock her, saying to a laughing audience, “The most insidious thing that Chuck Schumer and Joe Biden are trying to perpetuate, and Bernie and Elizabeth and Kamala — Kah-ma-la, or Kah-mah-la, or Kamala-mala-mala — I don’t know, whatever.”

Perdue has served in the Senate with Harris for around three years. He also sits with Harris on the budget committee. Harris’ spokesperson Sabrina Singh called the moment “incredibly racist.”

We are so much better than this. pic.twitter.com/9AvoQK4RdN

We’re 18 days out and I’m narrowly leading Sen. Perdue in the polls.

Chip in $1 to end his career:https://t.co/EIcdqorNzj

Previous Covidiot Arrested In Murder Threat Against KS Mayor
Next Trump: If I Lose, Maybe I’ll Leave The Country [VIDEO]