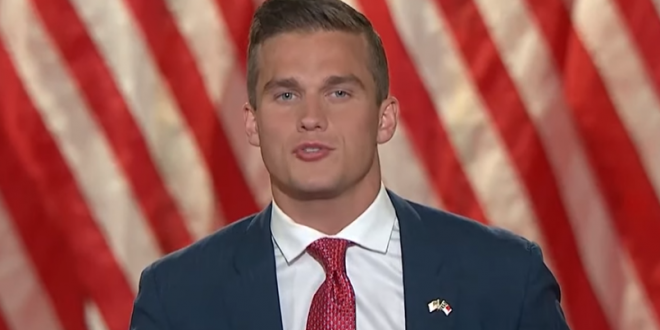 Madison Cawthorn, a House Republican candidate in North Carolina, created a website attacking his Democratic opponent that made a racist characterization of a watchdog reporter as someone who works “to ruin white males.”

Cawthorn, 25, a political upstart who beat the GOP establishment, Trump-endorsed candidate in a North Carolina primary election, issued a statement Friday correcting the language used on the website and claiming that it wasn’t intended to be about race, but rather a commentary on the reporter’s politics.

“I went and watched that video where they got that actual quote from Thomas Fiedler, saying his goal was to work for nonwhite males,” he said. “It was a major syntax error that was not clear that we were quoting him. Without context, that looks awful. At the end of the day, the buck stops with me. I should have read deeper into the moetaxes.com website.”

“At the end of the day, someone on my staff, not exactly sure who, made a mistake,” Cawthorn added. “I did approve the moetaxes website. I wish I had gone back and really read that and said, ‘Hey this could be ripped out of context.’”

Cawthorn has an widely criticized history of dalliances with white supremacist imagery.

Some fresh #ncpol for you. I spoke with @CawthornforNC a couple of hours ago, during which he addressed the racist attack on an @AvlWatchdog journalist that appeared on one of his campaign’s websites. https://t.co/qxyUgw0ymz