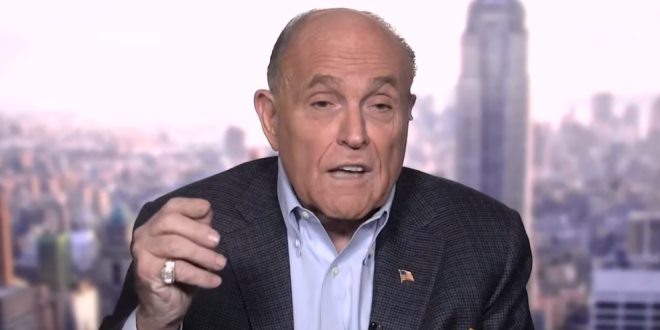 Giuliani, speaking on Bloomberg TV, was asked about his Monday interview on Fox News when he coughed several times on air as he criticized Democratic presidential nominee Joe Biden for encouraging the use of face masks.

The Trump confidant, who said he was tested for the virus two hours before his Fox News appearance, tweeted Tuesday that the test came back negative. It was the second negative test for the former New York City mayor, and he said he plans to get tested again Friday.

Midway through the interview, Giuliani went on the offensive by claiming Biden is mentally “impaired,” which earned a rebuke and a demand for proof from Tom Keene. “Oh, come on!” Keene exclaimed as Giuliani continued to claim Biden fits the profile for people with dementia.

Lisa Abramowicz jumped in and tried to get the conversation back on track, but Giuliani kept going off by claiming “you are depriving the American people of a fair chance to hear the truth! It’s disgraceful!” “We’ve agreed to do an interview, not a monologue,” Ferro said. “Do you want to let me ask some questions.”

“No, I agreed to come on so I could tell the truth,” Giuliani answered. “I didn’t come on to be a slave to your questions if you’re not going to be fair.”

I just experienced the Democrat owned press go bonkers on me on Bloomberg.

When I said Biden is suffering from dementia they cut me off.