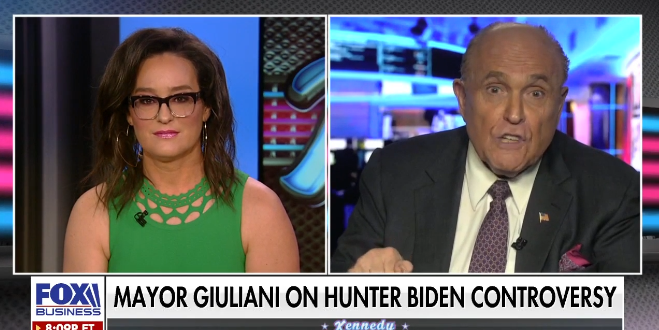 Giuliani Rages At Fox Business Host: You’re Comparing Me To A Crook, You Better Apologize To Me [VIDEO]

Rudy Giuliani exploded in a heated interview with Fox Business host Kennedy Tuesday night when she threw out a comparison between his actions and those of the author of the infamous Trump dossier. “You’ve got to be kidding me. I was acting like Christopher Steele?!” he said. “That’s what it sounds like,” Kennedy said. “You better apologize for that,” Giuliani fired back.

“I’m accusing you of acting in a capacity to Christopher Steele, and that you were going back and forth between Ukraine and the United States…” Kennedy said as Giuliani went off. “Similar to a CROOK?!” Giuliani said. “What you are saying is an outrageous defamation of me, of my reputation! Every single thing is here! And I want you to look at it, and then you apologize to me!”

Giuliani and Kennedy spoke over one another, with Kennedy saying, “I’m accusing you of acting in a capacity similar to Christopher Steele and that you were going back and forth between Ukraine and the United States.”

“What you’re saying is an outrageous defamation of me, of my reputation,” Giuliani responded, inviting Kennedy to come to his office to view the documents on Hunter Biden Wednesday and apologize on her show later that day. Kennedy answered she “will come see it.”

“I came on your show in good faith to give you evidence that is being withheld from the American people, and I get defamed,” the attorney said. Giuliani then attempted to end the interview, saying, “This may be the last time we’ll be on camera because I don’t let people call me Christopher Steele.”