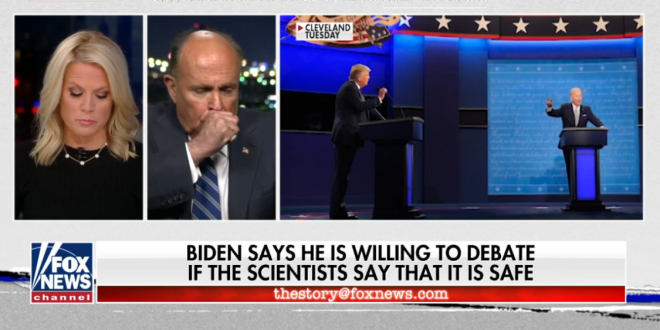 “There’s a balance here to be struck, between wearing a mask and wearing a mask to the point of almost, you know, political theater, or — or maybe even worse than that, fear, an irrational fear.

“I mean, there’s a lot of irrational fear in our society right now. And the president, by — by fighting this, is kind of leading the way. I mean, he’s a general that leads from the front. He’s not asking people to take risks that he doesn’t take.

“If you — if you stand — if you stay back, if you’re behind the curve in terms of bringing our society forward, you really can’t be president.” – Rudy Giuliani, coughing throughout his appearance last night on Fox News.

Rudy Giuliani coughing through his interview on Fox News

Coughing Giuliani says he’s waiting on his #COVID19 test results. Even the Fox News anchor is asking if he had COVID by the end. https://t.co/SGovfVEbJp

Previous Tucker Carlson: Trump’s “Recovery” Proves The Media Is Lying About How Dangerous COVID Really Is [VIDEO]
Next VIRAL VIDEO: Kellyanne Conway Screams F-Bombs At Her Daughter For “Lying” About Her Mom’s COVID Tests