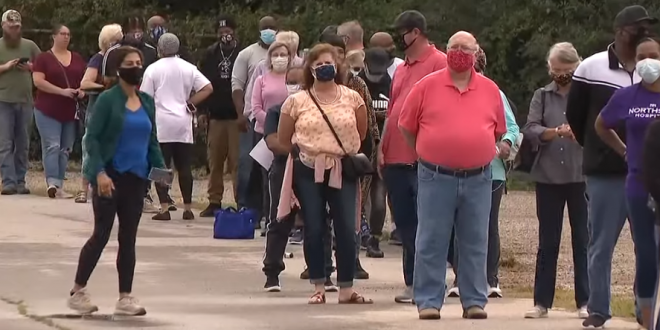 I waited 5 hrs and 7 mins to vote early in #Georgia today. The line was crazy because it’s the first day of early in-person voting. But, it was worth it! #GeorgiaVotes #GApol @fairfightaction #BidenHarris #KHive #DumpTrump #Vote #VoteHimOut #JonOssoff #Election2020 pic.twitter.com/KP9awlLARr

Night has fallen, but voting lines continue in Marietta, Georgia. The @WCKitchen team just finished serving dinner. They met someone walking out who arrived at 8am — he waited 12 hours to vote today. We must do better! Until then, #ChefsForThePolls will try to keep everyone fed. pic.twitter.com/RcnG8BFSWW

The state’s voter rolls have grown by nearly 2 million since the U.S. Supreme Court gutted the Voting Rights Act in 2013, but polling locations have been cut by almost 10%, with Metro Atlanta hit particularly hard. https://t.co/Qs9YCsxV42

Voter excitement does not equate to 10+ hour wait in voting lines.

The long lines and absentee ballot snags that plagued Georgia’s June primary were just the latest problems in a state that has become a ground-zero for voting issues. While changes were made in its aftermath, some fear the state remains unprepared.https://t.co/y7A66P3zDx