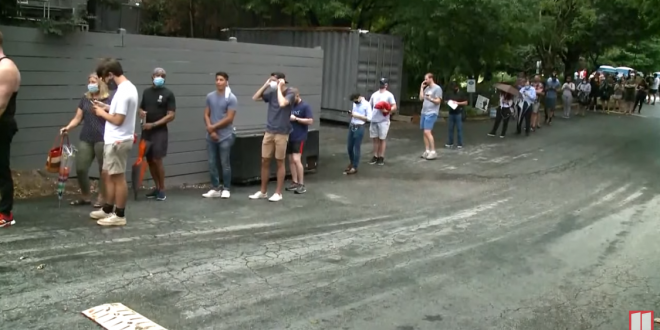 Eager Georgia voters swarmed to polling places Monday morning for the start of three weeks of early voting before Election Day. Voters filled parking lots and waited in lines to lock in their choices in advance of Nov. 3. Even before voting sites opened, voters wrapped around buildings and prepared for delays.

Early voting in Georgia. Not even 7:00 am and it looks like I’ll be in line for awhile. It’s worth it. VOTE!!!!!!! pic.twitter.com/uDM7XgRrEE

GEORGIA VOTERS: Today, 10/12, is the first day to vote early in person! Go to https://t.co/XYLW8Buumc to find a location near you, and share the link with friends and family. #gapol

Not in GA? Go to https://t.co/XYLW8Buumc to find information about voting in your state. pic.twitter.com/2zYM6fl7Aj

In 2016, just over 200,000 Georgians voted by mail in the general election, but this year, already 410,000 absentee ballots have been returned, and there are still 22 days until those ballots are due.https://t.co/zWsnuzING1

Previous N-Word Hurled At Wife Of PA Lt. Governor [VIDEO]
Next Cuomo Shoots Down Report On Being Biden’s AG