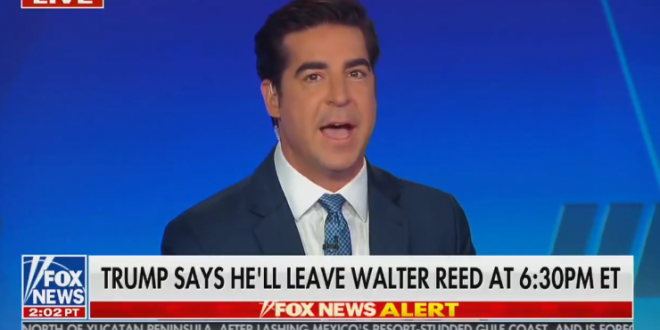 Fox Host: Trump Leaving Hospital Is Like A Wounded General Going Back To Fighting On The Front Lines

Fox News’ Jesse Watters reacted to President Donald Trump leaving Walter Reed by comparing him to a wounded general and saying he’s now “invincible” compared to the media coverage of his health.

On The Five, Watters said Trump is a wartime president and him leaving Walter Reed is like “when the general gets wounded by the invisible enemy, goes and gets patched up, and then gets right back to the front lines fighting.”

“I think now the president is invincible just by the way the media has set expectations so low,” Watters said. “This thing was supposed to be a death sentence and he’s walking out of Walter Reed three days later better than ever. I just don’t think they played this right.”

Jesse Watters compares Trump leaving Walter Reed tonight to a “general [who] gets wounded by the invisible enemy and goes and gets patched up and gets right back to the front lines.” pic.twitter.com/mP1BVDSBD3