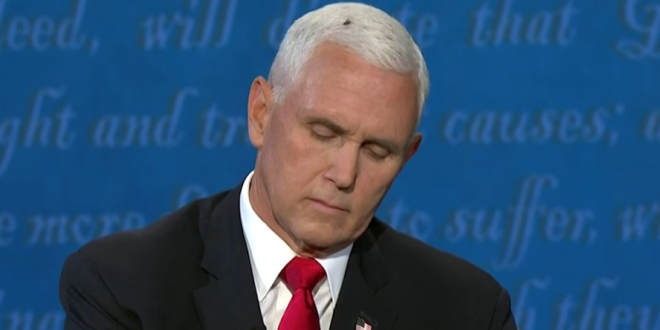 President Trump’s handling of the country was the elephant in the room during Wednesday’s vice-presidential debate, but it was a fly, taking a brief break from flying, that couldn’t be ignored by viewers watching the event from home.

Vice President Mike Pence, his hair perfectly coiffed, never reacted to the fly’s appearance on the right side of his head. It stood out against his bright white hair, standing still for the most part but moving around slightly before, well, flying away.

A local TV news reporter from California clocked the fly’s screen time on Mr. Pence’s head at 2 minutes, 3 seconds. On social media, the fly became the biggest star of what came across as “a normal debate,” as CNN’s Jake Tapper put it.

Some of you may recall that when a fly landed on Obama, World Net Daily declared that as proof he is the antichrist. Or something.

That’s right, I was featured tonight on @MSNBC. I’m really flying up in the world! pic.twitter.com/2KHzuJQWwK

CNN: The fly
ABC: The fly
Fox News: A fly? Or a miniature drone sent by Barack Obama to spy on VP Pence? Find out on Hannity tonight. #TheFly #VPDebate

Pence didn’t come to debate, he came to play dodge ball. He dodged on COVID-19 response, dodged on pre-existing conditions, dodged on abortion, dodged on peaceful transfer of power. #MikePence dodged everything but that fly #Debates2020

The fly on Pence’s head just died from COVID-19.