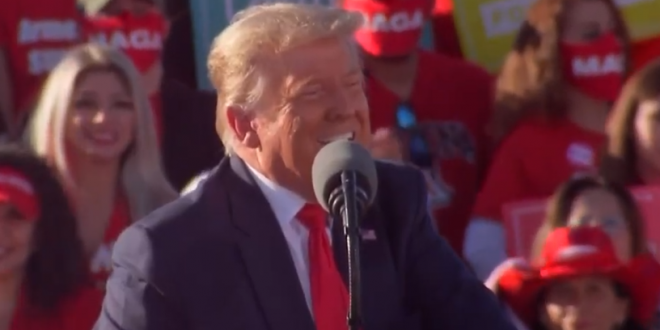 Fighter Jet Uses Flares To Ward Off Wayward Plane Over AZ Trump Rally, Trump Claims Flares Are In His Honor

An aircraft entered restricted air space over President Donald Trump’s rally in Bullhead City, Arizona on Wednesday, leading to a fighter jet being scrambled to intercept it. The smaller aircraft was not visible to CNN reporters on the ground in Arizona but the fighter jet could be heard overhead, leading to a reaction from the rally crowd and the President himself. Trump, apparently caught off-guard by jet above, said that the plane was “about four days old” and touted his funding for the military.

“I love that sound, I love it,” Trump said at the sound of aircraft engines. “You don’t know what I went through to get those suckers up there — I had to get that money from the Democrats.” He said the jet was “trying to show off” for him and called the flares being deployed “a little display” for the President. The crowd cheered loudly as the jet could be heard overhead, with chants of “U-S-A” and one man yelling, “That’s the sound of freedom!”

BREAKING – F-16 jets intercepted an aircraft flying near one of President Trump’s rallies in Arizona today, deploying flares in order to get the civilian aircraft to depart the restricted airspace (NORAD) pic.twitter.com/FBWHxNImtq