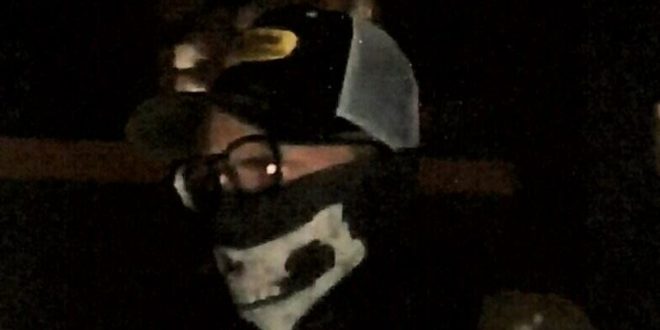 In the wake of protests following the May 25 killing of George Floyd, a member of the “Boogaloo Bois” opened fire on Minneapolis Police Third Precinct with an AK-47-style gun and screamed “Justice for Floyd” as he ran away, according to a federal complaint made public Friday. A sworn affidavit by the FBI underlying the complaint reveals new details about a far-right anti-government group’s coordinated role in the violence that roiled through civil unrest over the Floyd’s death while in police custody.

Ivan Harrison Hunter, a 26-year-old from Boerne, Texas, is charged with one count of interstate travel to incite a riot for his alleged role in ramping up violence during the protests in Minneapolis on May 27 and 28. According to charges, Hunter, wearing a skull mask and tactical gear, shot 13 rounds at the south Minneapolis police headquarters while people were inside. He also looted and helped set the building ablaze, according to the complaint, which was filed Monday under seal.

According to the allegations in the criminal complaint and law enforcement affidavit, upon returning to Texas, HUNTER made various statements on social media describing the violence in which he engaged in Minneapolis. On June 3, 2020, officers with the Austin Police Department conducted a traffic stop on a pick-up truck for numerous traffic violations. HUNTER was one of three occupants in the vehicle.

HUNTER, the front seat passenger, had six loaded magazines for an AK-47 style assault rifle affixed to a tactical vest he was wearing. Officers found three semi-automatic rifles on the rear seat of the vehicle, one loaded pistol in plain view next to the driver’s seat, and another loaded pistol in the center console.

Several days after the traffic stop, federal agents became aware of HUNTER’s online affiliation with Boogaloo Bois member Steven Carrillo, who has been charged in the Northern District of California with the May 29, 2020, murder of a Federal Protective Service Officer in Oakland, California.

Federal law enforcement say a member of the “Boogaloo Bois” open fired on Minneapolis’ Third Precinct with an AK-47-style gun and screamed “Justice for Floyd” as he ran away, in part of a coordinated attack by the far-right anti-government group. https://t.co/msAVUR7P6d

Ivan Hunter, a Boogaloo Bois member, was just charged with firing a semiautomatic rifle into a Minneapolis police department building, which he also helped set on fire. This was a coordinated attack to ramp up violence after George Floyd’s murder. #mnleg https://t.co/ZY4zrH7Qox

Right wing Boogaloo Bois and others are staging violent attacks against the police so that Black Lives Matters will be blamed.https://t.co/5DTvdIMTEc