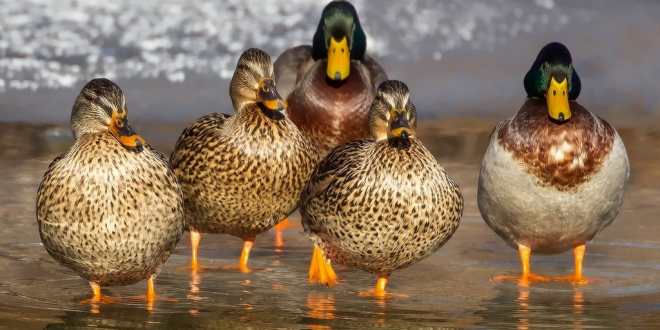 The paintings submitted for this year’s federal duck stamp contest feature familiar images of wildlife art: A Cinnamon Teal bobs on a mountain lake. Two Brant tuck in to land in coastal chop. A placid pair of Red-breasted Mergansers float side by side, their jaunty crests aglow in early morning light.

But a closer look at the contest entries reveals other, less expected details. In scene after scene, wooden duck calls—which hunters use to lure in the birds—drift along the water or rest in the reeds. In several others, empty plastic shotgun shells litter the shallows and the shore.

This unusual abundance of hunting paraphernalia is the result of the Trump administration’s recent rewrite of the rules for the annual competition sponsored by the U.S. Fish and Wildlife Service (FWS).

Since 1934, the proceeds from the federal duck stamp have raised more than $1 billion, and led to the protection of 6 million acres of land. This year, the Trump administration changed stamp contest rules: every painting needed to include hunting imagery. https://t.co/r5OlGDaqF6