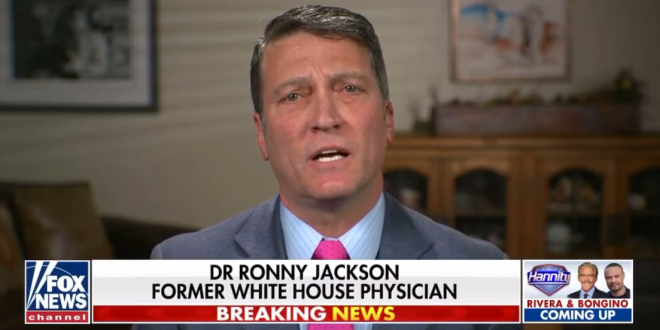 Ronny L. Jackson, a former White House physician and retired Navy rear admiral, said Tuesday that even though he is no longer a practicing doctor and is not in a position to make a diagnosis, he is concerned “as a citizen” about Biden’s fitness for office. “I actually don’t even practice medicine at this point,” Jackson, who is also the Republican nominee in the race for Texas’s 13th Congressional District, told reporters on a conference call organized by the Trump campaign.

Jackson said that while he is not accusing Biden of having Alzheimer’s disease and has never had Biden as a patient, “I’m a physician, obviously, so I’ve seen a little bit about how the issues with cognitive ability, how they start.” “You have good days and you have bad days,” he added. “That’s what I’m saying is going on here. … I’m not even saying it as a physician. I’m saying it as a concerned citizen.”

Read the full article. Jackson last appeared on JMG when he was trotted out by Sean Hannity to accuse Biden of taking memory enhancing drugs.