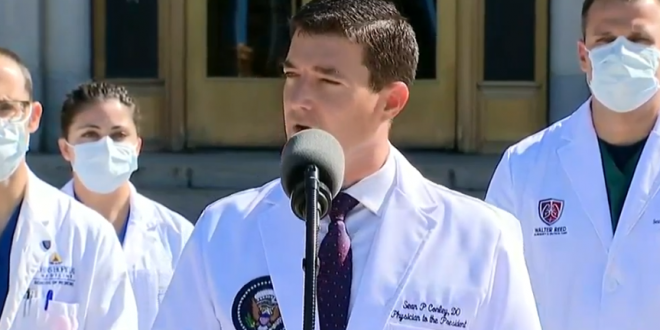 President Donald Trump reported no symptoms of the coronavirus Tuesday following his first night out of the hospital, the White House physician said.

“This morning the President’s team of physicians met with him in the Residence,” Dr. Sean Conley said in a brief, nonspecific memo, the latest report on Trump’s progress battling Covid-19.

“He had a restful first night at home, and today he reports no symptoms,” Conley wrote. Trump’s “vital signs and physical exam remain stable,” Conley wrote. “Overall he continues to do extremely well.”

Trump looks like a goldfish that fell out of the fishbowl onto the floor, gasping for breath. pic.twitter.com/aO2GS79ZiL

Trump climbs a few steps to the White House, takes off his mask and then is visibly gasping and having diffulty breathing while he tries to wave and pretend everything is fine. pic.twitter.com/VXxSh1BNuO