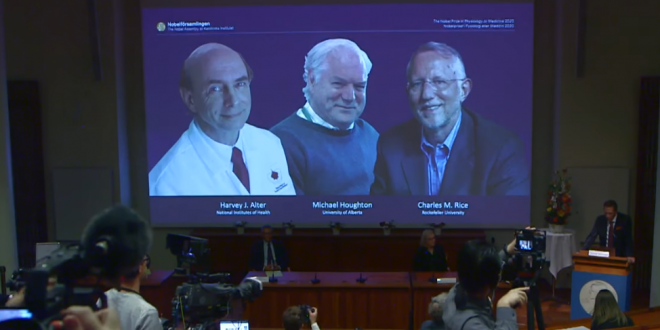 Americans Harvey J. Alter and Charles M. Rice, and British scientist Michael Houghton were awarded the Nobel Prize for Medicine or Physiology on Monday for the discovery of the Hepatitis C virus. The head of the Nobel Committee, Thomas Perlmann, announced the winners in Stockholm.

The medicine prize carried particular significance this year due to the coronavirus pandemic, which has highlighted the importance that medical research has for societies and economies around the world.

Despite the global interest in medical science and research this year, it was always unlikely that the winners of the 2020 prize would have been directly involved in researching the new virus, as the prize generally goes to discoveries made many years or even decades earlier.

BREAKING NEWS:
The 2020 #NobelPrize in Physiology or Medicine has been awarded jointly to Harvey J. Alter, Michael Houghton and Charles M. Rice “for the discovery of Hepatitis C virus.” pic.twitter.com/MDHPmbiFmS

Previous Barr Reverses, Will Begin Several Days Of Quarantine
Next HHS Had CDC Change Warning On Risk To Children