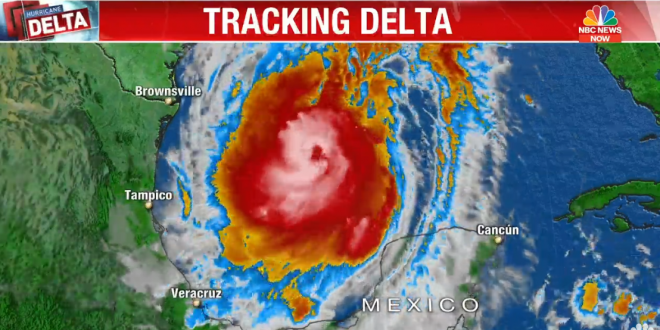 Hurricane Delta roared out of Mexico and back into the Gulf on Thursday, a havoc-wreaking Category 2 storm that was gaining strength as it set its sights on the beleaguered Louisiana coast. AccuWeather hurricane expert Dan Kottlowski said Delta was expected to grow in size and strength, possibly reaching Category 4 status over the Gulf before slamming into the Louisiana coast late Friday, probably as a Category 3 storm.

A Category 3 hurricane has sustained winds of 111 to 129 mph, while a Category 4 storm has sustained winds of 130 to 156 mph. Both are considered “major” hurricanes. Southwestern Louisiana is still recovering from Hurricane Laura, a Category 4 storm that pounded the area in August. Thousands of Laura evacuees remain in hotels around the state. Delta would be the 10th named storm to hit the U.S. in a single season, an all-time record.

A big part of Louisiana’s coast is under a hurricane warning, as Hurricane Delta heads toward an expected landfall Friday. Water from the storm surge could reach as high as 7-11 feet in some areas.

“Today is your day to get ready,” says the NHC director.https://t.co/BLQ8heoJtU

The eye of Hurricane Delta has finally arrived. This hurricane is well on its way to becoming a Category 3.

Folks in southern Louisiana should prepare for a catastrophic hurricane. pic.twitter.com/ODsvWJFBve

Here in Downtown Lake Charles, Louisiana ahead of Hurricane Delta’s arrival. Seeing many buildings boarded up. One resident I spoke to who rode Laura out 6 weeks ago said he “will never stay for another hurricane.” He and his wife are fleeing today. pic.twitter.com/jpE7LOWbh3