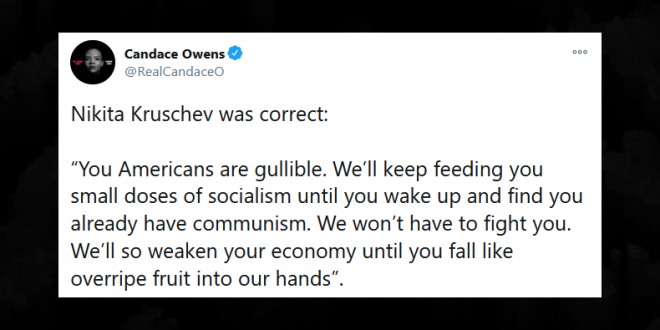 A viral post on social media falsely attributes a lengthy quote predicting the adoption of communism and the gradual creation of a “socialist state” in the U.S. to former Soviet leader Nikita Khrushchev on September 29, 1959.

On September 18, 1959, Khrushchev addressed the UN General Assembly. A transcript of this speech by the New York Times shows no evidence Khrushchev made the remarks attributed to him on social media.

Multiple sources can confirm that Khrushchev’s visit to the U.S. concluded on September 27 of that year, which means that he could not have addressed the UN General Assembly on September 29, 1959, as alleged in the post on social media.

“You Americans are gullible. We’ll keep feeding you small doses of socialism until you wake up and find you already have communism. We won’t have to fight you. We’ll so weaken your economy until you fall like overripe fruit into our hands”.

Previous Biden: “Who Let All These People Into My Basement?”
Next Allegedly Armed TX Cultists Ambush Biden Bus [VIDEO]