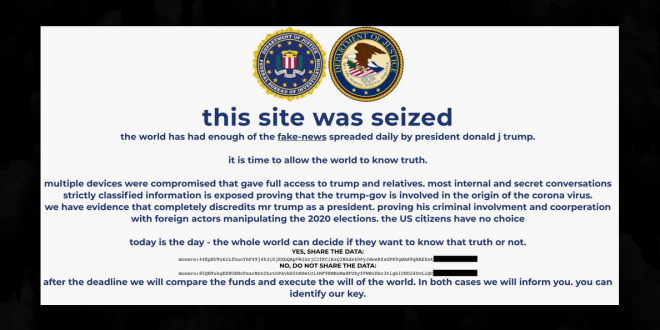 President Trump’s campaign website was briefly taken over by hackers who defaced the site late on Tuesday. The defacement lasted less than 30 minutes, but the incident came as Mr. Trump’s campaign and that of his opponent, Joseph R. Biden Jr., as well as law enforcement and intelligence agencies, have been on high alert for digital interference ahead of next week’s election.

In a statement, Tim Murtaugh, a spokesman for the Trump campaign, confirmed the website’s defacement and said it was “working with law enforcement authorities to investigate the source of the attack.” He added, “There was no exposure to sensitive data because none of it is actually stored on the site. The website has been restored.” The F.B.I. did not immediately comment on the incident.

Claiming to have inside information on the “origin of the corona virus” and other information discrediting Trump, the hackers provided two Monero addresses. Monero is a cryptocurrency that’s easy to send but quite difficult to track. For this reason it has become associated with unsavory operations such as this hack.

One address was for people who wanted the “strictly classified information” released, the other for those who would prefer to keep it secret. After an unspecified deadline the totals of cryptocurrency would be compared and the higher total would determine what was done with the data.

Previous White House Science Office Lists “Ending The COVID Pandemic” As The Top Accomplishment Of First Term
Next NOM Takes Credit For Barrett Confirmation: We Did It